No waiting around for this U.K. based grocery retailer.  They needed an independent software consulting team to get their website live.

A U.K. based grocery retailer grew frustrated. The offshore development vendor they hired to re-vamp their eCommerce website was late and had an unexpectedly high number of defects. With an increasing number of shoppers going online to buy their products and pressure to get the website live, they needed to find a company that could dig in, find the root causes, and improve the quality.

Lighthouse got engaged and started initially analyzing the quality and completeness of the requirements. We quickly discovered a very high defect density which was causing confusion in architecture and development. In addition, Lighthouse sized the system, reviewed the vendors test cases and reported defects, and estimated the client would need to find and remove approximately 200 critical defects (in addition to hundreds of additional majors defects) to have a chance of meeting their deadline.

The light at the end of the tunnel became Lighthouse. With their expertise in providing software testing managed services, professional testing staff, and an in-house testing lab, Lighthouse was able to conduct the user acceptance testing for this grocer. 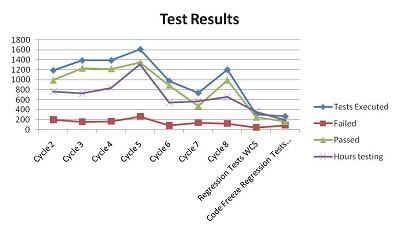 Over a period of 7 months, the team, with an average of 19.4 years experience, was able to fluctuate between 6 to 14 testers in order to meet the demands of the program.  Because of the time crunch, Lighthouse was able to shorten the time to market by running multiple user acceptance test cycles in parallel with the off-shore vendor’s system integration tests.

Overall, Lighthouse ran 13 test cycles against 20 builds.  The test cycles had varying levels of regression depending on the bug fixes in that release.  While using HP Quality Center and the Lighthouse True north Testing™ metrics, the team ran multiple test cycles, totaling 10,436 test cases.  As the test cases were executed, Lighthouse discovered 939 unique defects, 293 of them being critical defects (50% more than their targeted objective). In the early test cycles, it became quickly clear that the quality from the offshore provider was worse than originally anticipated.

With the ability to scale up and down the testing team, Lighthouse was able to successfully meet the varying demands of the program’s cycles.  Two other factors contributed to the program’s success: 1) the communication skills, professionalism, experience, and diligence of the Lighthouse testing team; and 2) Lighthouse’s True North testing™ metrics system which provided daily feedback on test progress as well as product quality.

Additionally, Lighthouse provided on-going project management and quality consulting services throughout the entire program to define specific quality criteria in all of the vendor’s deliverables across the SDLC, including requirements, code, test cases, and defect reporting. This helped our retail client drive needed changes with their offshore development vendor.

“From my perspective, engaging independent Quality professionals is critical.  They are an extension of our team and bring with them the discipline of test script writing, test execution and defect reporting so we know where we are at all times. Thank you, Lighthouse.” – Program Manager

Drop us a line for an informative chat with one of our experts.

No high-pressure sales here. We promise.