Automation testing: are you ready?

Once upon a time, software development teams waited until the end of the development cycle to fully test the finished product. This practice had a team of manual testers follow scripts, or they removed SMEs from their day jobs and monopolized their time for 4-6 weeks while they tested the functionality of the software.  Of course, they discovered lots of bugs in that first full test cycle, and then ran several long test cycles to retest the system after the development team made the fixes.

Even with the use of professional testers, the SMEs still maintained a degree of involvement and were part of the ultimate approval.  However, taxing the SMEs too much slows productivity through the entire organization, with their absence from their area of expertise. With that in mind, it is important to be as efficient as possible with their involvement. This manual practice is still done today with many operations, but in-practice continues to evolve. The concept of continuous delivery is new, but not-so-new to those with the highest efficiency practices.

In a continuous delivery model, software is constantly in development and must always be ready to deploy. The Agile methodology generally has the team releasing new code in sprints (typically every two weeks).  That makes quality crucial at each and every sprint. With continuous testing, there is no big bang at the end. Testing occurs in small pieces as soon as possible, right when the code is developed.

To keep the development team’s momentum humming, speed matters. One delay can slow down the block the release of new functionality in a sprint and cause it to slip to a subsequent sprint. This makes managing testing needs a massive undertaking, and impossible by traditional means.

In addition to speed, quality is at the foot of high efficiency. When a software tester manually checks a system, mistakes are possible (some consider them inevitable to some degree). When considering the test script for hundreds of lines of code, the tester can experience fatigue that may affect their accuracy. In the event of retesting after a fix is implemented over and again, they are more likely to skip certain steps, thus increasing chances of something being missed.

A different approach with automation

That’s where automation testing comes in. Test automation manages the moving parts by tracking and managing the testing needs, from how much of the system the tests cover and what other testing may be necessary for the pipeline. If automation testing is done well, it ensures a high standard of quality in a dynamic, fast paced operation. It enables test professionals to focus on creating effective tests to maintain that high level of quality now that they can let go of the minutia that once taxed a bulk of their time.  For example, it allows them to very easily test very large data sets using a single script vs. the old manual days when they might only have time to execute 1-2 data sets.

On the quality level, automation can take many, if not all, steps of certain tests, eliminating the human elements of fatigue, which may add risk of skipping steps, and opportunities for error. Automation ensures that each test executes the same way each and every time. When scripts are well architected and designed, many can be reused to ensure each check is executed the same way as well.  Developers are typically still responsible for unit testing, but automated unit tests can be written to define the functionality before the code is written. The developers discover defects immediately upon making a change, which is the least expensive to fix.

Test automation is beneficial for test cases that are executed repeatedly, such as for cross-device and cross-browser compatibility, and those as part of a full or partial regression suite. The reusable tests are especially valuable when it comes to regression testing, when developing a common flow, for example. The test may be repeated up to a certain point when an enhancement is introduced. This ensures that the test is identical to the prior code runs and is already proven for functionality, so with the enhancement being the only change, a bug is easy to identify and locate in the code.

This consistency and the increased speed of testing fosters an entirely different momentum. The SMEs that may have been otherwise testing has the ability to concentrate on other project priorities. Test automation allows your team to execute more tests in less time, increasing coverage and freeing human testers to do more high-level, exploratory testing efforts.

In addition to speed and accuracy, many automation tools also have reporting capabilities. They log each test script along with results so users can monitor the status of each test. They can compare one set of results to other scripts to assess how the software is achieving the expectations and requirements overall. Testing automation helps a team quickly identify bugs in the earliest stages of development, which not only reduces working hours, but also resource needs overall.

Fast, reliable and repetitive testing supports Agile delivery. Bring to that the high customer satisfaction that comes with frequent product updates and you have an incredible value in automation testing.

The human factor, while irreplaceable in some areas, can be expensive in others. It doesn’t take a genius to know that even the best still lack perfection. When it comes to testing, escaped bugs, missed acceptance criteria, and poor performance all evolve into higher support costs, and technical debt. These costs manifest into customer and end-user issues, reduced productivity all the way to the front line, and even external customers, which turns into an even higher organizational cost.

Automation testing minimizes the human factor for reliable and repeatable dependability. With this, defects are identified as early as instantaneous and often before any SME is involved. When caught early, rework is minimized, which keeps morale high on the development team. Less need for SMEs means fewer occasions of lost productivity in their departments. Fewer defects making their way to the SMEs means the need for their interaction is minimized as well.

Automated software testing has long been considered critical for big software development organizations but is often thought to be too expensive or difficult for smaller companies to implement. The key value is the accelerated time to market, where ROI is realized. As the industry moves to Agile and continuous delivery for most of today’s software development, considerable value is lost without automation testing. When factoring in the cost savings and reductions associated, and adding to that the accelerated time to production and team morale, the ROI is evident.

There are many software testing firms to choose from out there. As you explore key attributes and distinctions, take into account your team, current practices and values. Instead of a complete overhaul of the process, Lighthouse can customize our approach to fit your needs and compliment what works well already. Free your SMEs and cut your testing budget in half with a customized solution from Lighthouse.

Get our white paper on choosing an automated testing tool. 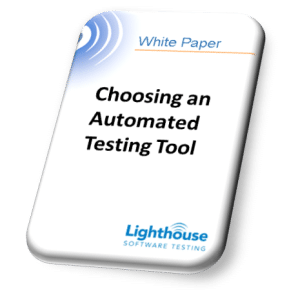